Mirror, mirror on the wall

It was Sunday. We were having dinner with friends. The television was on and a football game was playing when I heard the announcer say, "...Michael Vick..." I was appalled and verbally announced my feelings. My friend said, "He paid his debt. He went to prison!"

I believe in forgiveness. I also believe there are some crimes so terrible, once committed; you give up your rights to certain privileges.

In the world of sports, if you are a professional athlete and caught betting, you have given up your right to be in the Hall of Fame. If you are caught taking steroids, you are stripped of your titles. So how is it, in that same world, you can be part of a dog fighting ring, torturing and killing them, and once you've "paid your debt", you are welcomed back into the star status arena of football, and hired to play on a professional team?

Is winning all that matters? What message does that send to the young people that worship the game and thereby, worship the players?

In my opinion, when Michael Vick became part of and profited from a blood lust sport, he gave up his right to be what he is today, a very highly paid professional athlete.

Waiting for a treat
I was not born with the patience gene. So along came our cavaliers. And now I have learned the art of patience. Not because they test my patience. But because of how patient they can be.

For example, when Max and Mollie want to play ball, Max will bring the ball, set it at my feet and wait, and wait, and wait. Every time I look at him, he looks back with yearning, seeming to implore me to pick up the ball and throw it! While Mollie sits with a stuffed toy in her mouth, patiently waiting with her brother, for the games to begin. You can guess the rest, eventually, I give in and the two of them fly around the house, Max chasing the ball, Mollie chasing Max.

It's the least I can do to reward their patience.
Posted by Eve at 5:39 AM 1 comment:

We are the same
My huband made the comment , "I don't know why artists are compelled to title their work."

Often times, when I am working on a piece, a title will present itself. As if the piece is naming itself. It's a method of communicating the message behind the work. Part of the dream vocabulary I rely on and attempt to weave into my work.
Viewer interpretation then takes over. "We are the same", pictured above, on the surface, is two Ibex facing each other. If you apply the title to humans, it suddenly takes on a more complex meaning. A maze of political, religious and physical issues begin to surface. Questions arise. Introspection allows us to view each other more openly, forgiving differences and embracing those innate qualities that makes us who we are.

That's how life should be.
Posted by Eve at 6:24 AM No comments: 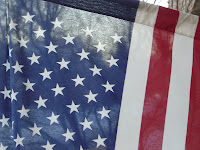 I remember exactly where I was and what I was doing, 10 years ago, today. My husband and I were working out, with NBC's Today Show keeping us entertained. When I saw the first plane hit, I thought, as most people, the pilot had lost his/her way. Then I saw the second plane hit and I froze. I realized with a sickening jolt, that both acts were delilberate and we were under attack.

I picked up the phone, dialed our best friends and said, "turn on your tv, we are under attack". Then I watched in stunned silence as the events escalated to the horror that is now woven into the tapestry of our history.

That was when I became addicted to morning news. I could no longer trust that something wicked would not come this way during the night. Now every morning, I turn on the news to see what had happened while I slept. Blessedly, wickedness had been kept away, even today. Regrettably, we can no longer trust that to be true, always.

I'm still deeply affected by those events. The paradox of live and nature, today is an incredibly beautiful day. Sunny, blue sky, wispy clouds and the temperature, a perfect 72 degrees. Nature's tribute to commemorate the 10th anniversary.

I sold one of my pieces today! "We are the same". The buyer now owns six of my pieces. She is becoming my partron. She also happens to be a dear friend, way before I got back into making art.
I'm off to the studio. I'm working on six 16x20" panels. Oil and cold wax. These pieces intrique me. I was looking through photographs my husband had taken of me. My hair had just started to grow back after chemotherapy. It was wild. It grew back a platinum grey and very curly. After having bone straight hair all my life, and suddenly at the youthful age of 54, I finally had the curly hair I envied on other people, I didn't dare hate it, after all, I was coming off of being bald!, so I had to be grateful. Let's just say, I have new sympathy for all you curly tops.
Back to the panels. The central themes are three black & white photographs. I printed them out on 8x11.5 paper and then wrote around the pictures. After collaging them down, I am now in the process of painting them. I'm taking my time. I want to do right by these images. I think they could take my work in a new direction. Actually, they already are.
Posted by Eve at 2:16 PM No comments: 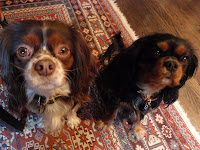 My website is up, so I won't be using this blog as a gallery for my work. Please visit http://www.eveozer.com/ to see my work.
Now I can use this blog to journal about my art and my thoughts and share inspirational writings. I deleted all the art posts and was surprised the last time I wrote anything was in 2009! Max as art, well, Max has a little sister, Mollie. So today I am introducing them together. They are a pair. Can't help but smile when I look at them. wouldn't you agree?
-Only this moment is life. -Thich Nhat Hanh

My dogs seem to comprehend this better than me. They truly live in the moment. They have taught me to shed my worries and petty grievances, simply by their presence. Their needs are so simple; love, food and a comfortable lap to sleep on. "And yes, take me out so I can "read the neighborhood newspapers" printed in the grass and do my business."
Posted by Eve at 4:15 PM No comments: