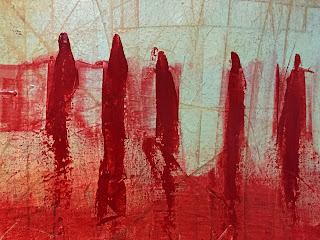 The modern artist, unlike his (her) artistic ancestors is in a sense forced to invent (her) own pictorial language before (she) can even think about elaborating on this language. (She) has the problem of both invention and elaboration.
Robert Motherwell

That elusive complex director, inspiration, has a way of manifesting in unexpected ways. Take these five figures above. On the one hand, they just appeared on the canvas, spontaneous marks made by my hand and yet, when I look at them, I realize I brought them back with me from France.

Earlier this summer I visited the Chartres Cathedral, one of the oldest cathedrals in Europe. I wanted to go there because I read the light within this place was supernaturally beautiful and there was a feeling of spirituality within its ancient walls.  When I entered the nave I was enveloped in the reverent quietude and felt I was in a place of grace.

Looking around I noted the beautiful Madonnas captured in the colorful pieces of stained glass and the compassionate Madonnas resting throughout in graceful sculptural forms. Not knowing it then, they would become the foundation for a new body of work. 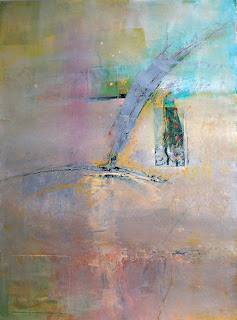 Robert Motherwell is my biggest artistic influence, a genius of abstraction and philosophy. Reading the passage above in; Robert Motherwell, 100 Years, I thought about this figurative mark, making its presence known on the canvas. Is this my language?  I'm not sure, but I will continue to explore it until it becomes silent.

Like an author writing a novel, at some point, the characters begin to breathe magical life into their own narrative, and every good author allows them to.

Abstract painting is the same. It starts as an idea and if allowed, begins to paint its own story. The human has to get out of the way so the muse can be heard.

After the five figures made their appearance on the canvas, I was flipping through the Motherwell book and came across this painting; Spanish Elegy XV. 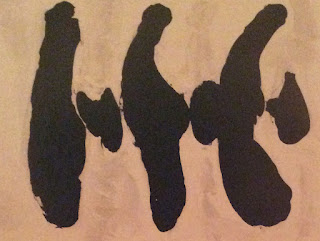 And before leaving for France, I took this picture during one of my morning walks. 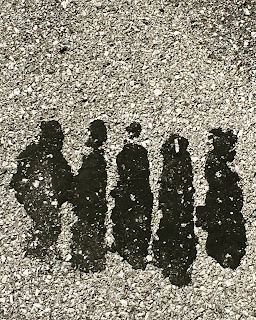 These unexplained connections excite me. I feel there is something blooming on the horizon.  And I look forward to the exploration and discovery.

The first time I saw you
I knew we were kin -

You – you were
cautious and upset.

Until me-
you were one of one
and you loved it that way.

I changed all that.

My love was
instant and unconditional.

When I came close
you growled a growl that had no bite
you moved
me - I moved too.

I needed to be next to you
and eventually you knew
you needed me too.

Now we are Siamese twins
joined by one father
separated by three years.

They call me black and tan
they call you chocolate-tri

We call each other
sister brother. 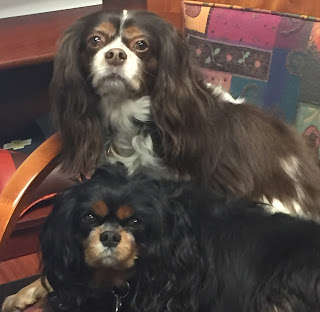