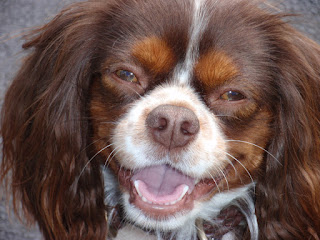 Max could speak volumes through his eyes.

Here’s the irony, three and a half years ago we flew him to Versailles, France to have life saving open heart surgery. The reason we went to France was the success of the surgeon, a Japanese doctor who had developed a technique where the dog’s immune system didn’t attack the sutures, thereby letting everything heal successfully.

In the U.S., the success of this surgery is about 40%. We didn’t like those odds.

Across the ocean, in Clinque Bozon, a small veterinary clinic, they were performing the same surgery with a 96% success ratio. We liked those odds.

We arranged for Max to get comfort dog status, which allowed him to fly in the main cabin with us, and off we went to Versailles for three weeks.

He had his surgery on July 3, 2016. Two and a half weeks later, we flew back home, and he was doing great. We were all so happy. Max had a stronger heart, and we allowed our imaginations to see him with us for many years to come.

About four months ago I took Max to our local vet, because I thought he had developed a couple of fatty tumors on his neck. To my knowledge, fatty tumors are benign and not uncommon in older dogs. Our vet felt his neck and said, “these are not tumors, these are his lymph nodes and they’re swollen.”

After a few tests, the diagnosis came back as positive for a very aggressive form of lymphoma. After consulting with an oncologist and our local vet, we decided to give Max chemotherapy. With his heart condition, he wasn’t a candidate for the most aggressive treatment, a 19-week protocol where he would have to have a treatment once a week for three weeks, off one week, and back to treatment.

We opted for the second-best course, which was an oral chemo treatment once every three weeks over a 15-week span. Within two days of the treatment, his lymph nodes had decreased dramatically in size. We were smiling, and hopeful and happy.

Within six days, I noticed his lymph nodes were swollen again, and now the ones on the other side of his neck were also swollen. Severe disappointment. Back to the oncologist, who suggested another course with a different drug. We said, let’s try it. That also failed. We had one option left, another drug.

Max had no ill side effects from the first two treatments, so we tried the last option. That also didn’t work. We all agreed it was time to put him on palliative care. At first, he responded well. Was running to and twirling around his food bowl, loved going out and rolling in the grass and slept in bed with us.

Every day was a blessing as we kept a careful eye on how he was feeling. As time went on, in small increments, we could see he was failing and finally, this Monday, those eyes that could write a book, looked into my eyes, and I knew.

I knew it was time; time to be compassionate and help you to a peaceful end.

I can hardly write this without my face falling to my chest. Oh Max, I miss you so. And the irony, it wasn’t your heart, after all my dear, it was a cruel cancer that took you from us.

This primordial hole in my heart, I know will heal, and in its place will be a legacy of wonderful memories, where you will nest until I draw my last breath. 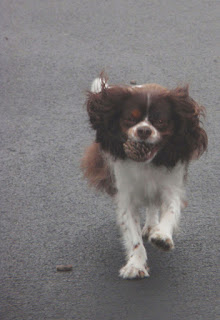 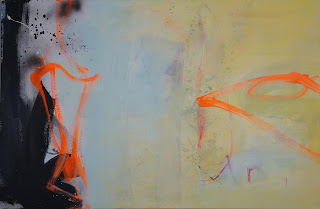 Are You Willing To Bring Your Own Story?
23x37
Acrylic & spray paint on canvas

"Painting is an illusion, a piece of magic. So What you see is not what you see."
Philip Guston

More so than any other form of art, abstraction requires a dialog between the artist and the viewer.

Since I am painting, not from visual reality, but from what I call inside-out painting; coming from my subconscious instead of the concrete world around me, I need the viewer to bring their own story into the painting in order to complete it.

That's what's so unique about this category of art; least understood by many, yet a form of communication that demands a collaboration between artist and audience.

When someone is drawn to my work, it's their own emotions about color and shape and line through which they see my paintings. I believe many people are intimated by abstract art because it doesn't relate to the world they see. But that's also what intrigues.

This is as difficult to put into words as it is to describe the art. Yet, there are plenty of critics that drown us in "intellectual art speak" elevating the work to an almost biblical level by tossing around big words and complex phrases meant to create a community of the elite, as if this form of art is only for the chosen.

Abstract art is closer to birth and childhood than to universities. You don't have to know why you like, you just do. And I am grateful to those who do, because I love making it.