The Dog Who Flew To France; A Tribute To Max 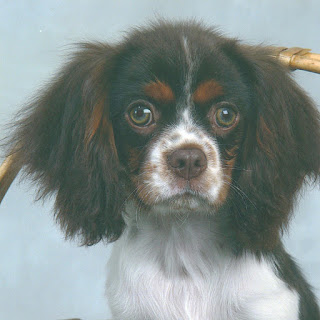 Max came to us in the late winter of 2006, via Easley, SC. He was our second Cavalier King Charles Spaniel. Looking into his warm speckled gold and brown eyes, we recognized an old soul in a puppy’s body. Max had been here before.

For the first seven years everything was perfect until the day our vet told us Max had a heart murmur, and for three years he monitored his heart. Then synchronicity stepped in.

I had to take Max to the vet for an ear infection, and our regular vet wasn’t available. The new vet did a routine heart check and said, “Whoa, that’s quite a heart murmur.” I mentioned our vet was keeping tabs on it. She never said a word, but her eyes communicated alarm and concern. As soon as I got home, I told my husband, we need to find a cardiologist for Max.

We found, 20 minutes away, in Chicago, practiced one of the top veterinarian cardiologists in the country, Dr. Michael Luethy. We made an appointment straight away. What Dr. Luethy said something we were prepared not to hear; Max’s heart murmur was severe, and he probably won’t make it six more months.

Shock doesn’t come close to the nauseating reality of those few words. What Max needed was open heart surgery to repair his mitral valves. The success of this type of operation in the U.S. is about 40%. Not odds we were willing to take.

Then Dr. Luethy said, “tomorrow I have a client coming in with his dog who had successful open-heart surgery at a clinic in Versailles, France and is coming in for his 90-day checkup. If you would like me to, I can give him your information.”

We learned the clinic’s success was 96% and they had been performing this surgery for almost ten years.

The following day we were on the phone with Dr. Luethy’s client, and with his help and guidance, we contacted the Clinque Bozon, in Versailles. Synchronicity stepped in once again. They were going to be performing this highly specialized surgery in six weeks, and they had one slot open. If Max passed the testing, he would have surgery on July 3, 2016.

From there it was a whirlwind of medical tests, shots and federal government paperwork to prepare Max for international travel. My brilliant husband got him comfort dog status and on June 29, we boarded Air France to Charles de Gaulle airport, Paris. We got bulk- head seats and Max was able to make a bed at our feet.

It’s funny how 19 lbs. of adorable fur can change the mood of a flight. Max was a handsome hit. All the flight attendants had to stop by and say hi. 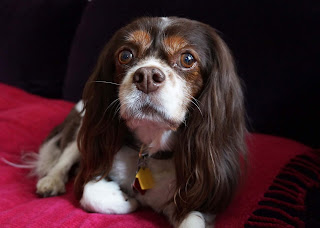 We rented an Airbnb and “lived” in Versailles for three weeks. Because Max couldn’t walk far and we didn’t rent a car, we travelled with a stroller. France being a very dog friendly country, we could take Max everywhere, and we did. So, when people would see us with a stroller, first they assumed we were French, and they assumed a child was in the stroller. To say the least, it was a conversation starter. 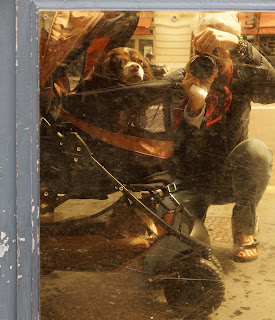 Max’s surgery lasted 10 hours and we watched the entire operation through a big plate glass window; two surgeons, Dr. Masami Uichi (who perfected this 96% successful surgery), assisted by Dr. Jean Hugh Bozon, his wife, Dr. Sabine Bozon, a cardiologist and several technical assistants.
We thought if Max can go through the surgery, we can stand watch over him, and somehow, he would know we were there.

Max stayed in the hospital for seven days, recuperating. Two weeks later, we were back on Air France heading to Chicago’s O’Hare airport. It was Bastille Day, and while we were on the flight, a terrorist drove a van into a crowd of people celebrating liberation. 86 people died. It was surreal.

This past summer, I was petting Max and felt a couple of lumps on the left side of his throat. I thought they were fatty tumors, harmless and not uncommon in older dogs. The diagnosis was lymphoma.

We took Max to Dr. Nathaniel Vos, an oncologist practicing with Dr. Luethy at MedVet. We learned it wasn’t just ordinary lymphoma, but a very aggressive form. We discussed options. Option one had the best outcome for a longer life, the treatment, chemotherapy once a week for 15 weeks.

Having gone through chemo myself 11 years ago, I immediately pictured all sorts of nasty side effects and perhaps the worst, temporary baldness. I was assured that dogs handle chemo differently and don’t generally suffer the same side effects and they definitely don’t go bald. The oncologist also mentioned that we would know within two-six days if the treatment was working.

Max received his first treatment. No ill side effects. Appetite as good as ever, energy level high, overall happiness pretty good. I checked his neck several times a day. And on the third day, like a miracle, the swelling was gone. I couldn’t feel them at all. We were ecstatic. That lasted for four days. I didn’t want to believe what I felt on day six, not only were his lymph nodes as large as ever on the left side, now his lymph nodes on the right side of his neck were swollen as well. Gut punch.

We called the doctor. He was very sorry and suggested a second chemo cocktail, not as effective, but it could extend his life, if it worked. Since he had no ill side effects with the first cocktail, we agreed to try this new one. It didn’t work. And the third option didn’t work, either.

Wandering around in this alternative reality, we finally decided, enough, and Max went on palliative care.

We were feeding him pasture raised eggs, steak and lots of love. Eventually, we couldn’t even tempt him to eat, which meant he wasn’t getting his heart medications or the palliative care drugs. I didn’t have the heart to force him.

Those adoring, wise gold speckled brown eyes were telling me he was staying alive for us. It was time to say goodbye.

Max, our mighty warrior, our love, our playmate, our bedmate, our soulmate, lost his battle and passed away on October 28, 2019.

We had the honor of being the blessed stewards of Max for 13 years, 10 months. Because of Max I am convinced that God-Dog is a spiritual palindrome. Either way you spell it, it means LOVE.

Max has carved a resting place in my heart; there he will nest until I draw my last breath. 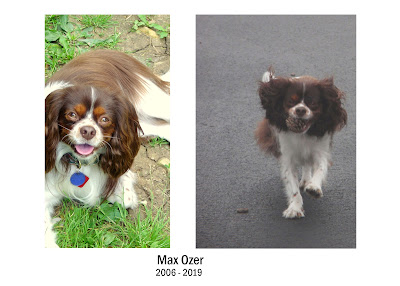 The grief
it comes in waves –
like the ocean’s tide
it ebbs and flows.

My eyes are dry
but my heart cries.

I honor these moments,
they are the offerings
I lovingly place at your altar.